Adraxys Molech waited patiently in his sanctum for his guests. A Dracon within the Kabal of the Black Heart, his lair was small by many other standards but in his mind it was temporary. His throne stood on a raised dais with his silent Incubi guards flanking him. A bell chimed and unseen lackeys opened the sentient gutwood doors giving two barely audible groans. Two lithe figures strode in with graceful moves that more than hinted at gruesome violence at a moments notice.

"You are welcome honored Succubi of the Red Grief". Molech was careful not to name either first in case the other took offence.

Both nodded, eyes constantly scanning the room for threats or challenges. One spoke up;

"You wish to enter into an alliance to gather souls from realspace?".

"Indeed, that is the reason for your invitation".

The second then spoke "Molech, you are still a minor Dracon within the Black Heart, and as such my superiors are unwilling to give extensive aid. Myself and Serpentia however, feel that after that incident with Archon Faik being trapped in torment sarcophagus indefinitely, you could be a worthwhile ally. We shall both bring our personal retinues and I can  call in a favour from the Black Wind Reaver band and another from the Twisted Mile Hellion gang. With these we can start our endeavor". With that the two Succubi left.

Molech then called to his almost trusted lackey, "contact your spy in the Tower of Tortured Secrets; I want to find a world for a realspace raid. Make it interesting.".

So I purchased the new Drukhari Codex and myself and a lot of the internet thinks its great. I like it a lot but I'm not going to review it there are plenty of reviews out there if you want that sort of thing. This post (and presumably a lot more) will be about my attempt to play out some sort of narrative with my crusade force. So here is my 50PL Drukhari army;

Principle of this army is speed, the Kabalite and Incubi go into the Raider, the Wyches go in the Venoms. Hellions and Reavers are bloody swift so depending on the mission and deployment they can be in hand to hand turn one. As yet no Coven troops as it's only 50PL. I spent two requisition points, one for a warlord trait for the Archon and one for the Triptych whip for one of my Succubi, the plan is to give other one a weapon upgrade or another warlord trait as soon as possible. There are a lot of unique things to help represent an Archon becoming a mighty force in Commoragh so hopefully over the coming months we will see Adraxys Molech become a major player in the Dark City.
By Jason F at May 01, 2021

Adraxys Molech waited patiently in his sanctum for his guests. A Dracon within the Kabal of the Black Heart, his lair was small by many othe... 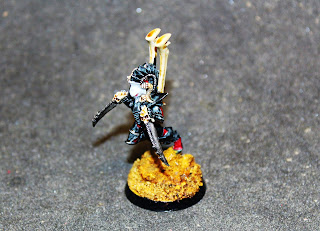