Greetings. Some more progress with regard to my little toy soldiers has been made, but none of the newly finished are soldiers, just vehicles and buildings. I just wanted to clear that up.

My Astra Militarum got bolstered recently when I finally decided to actually finish these, er, well ladies I suppose. Meet Karen, Lucille & Barbie, three vehicles to smash the face in of the enemies of the Emperor with. Karen is the Basilisk, Lucille the Leman Russ and Barbie is the Hellhound. They have my started-four-or-five-years-ago Olive yellow drybrush with some Aggaros Dunes camo stripes. Each one has roman numeral numbers from Green Stuff World, that were glued on then painted white. Another feature of these vehicles was the naming of them. Krablokistan tradition is such that military vehicles are named and are generally female. The names are trying to be witty, Karen because she reacts explosively to criticism, Lucille because of Negan's wife/bat and Barbie because she loves to cook.


Meanwhile Somewhere In The Imperium...

Several years ago I purchased an Imperial Bastion, slapped Vallejo Yellow Olive over it and moved on to the next project, What I didn't do was fit the heavy bolters to it as I 'didn't have the time'. Now that I came across said bolters I tarted them up with Skeleton Horde and Soulstone Red and attempted to affix them to the Bastion. Several seconds of pushing took the parapets off. Never one to let a small delay snowball into a much bigger one (joke!), I decided to add some humor to the parapet area in what I thought would be good clean Astra Militarum fashion. 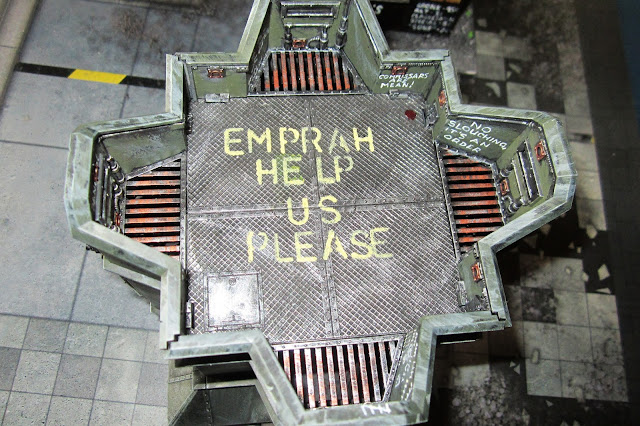 In March 2014 I put a page on here with ideas for new Necromunda territories, A ratburger stand. Now that idea is pretty much finished. Using bits of card pinned to foamcard to look like sidecycled building materials I have built Limpy's Diner, well it will be when he can afford tables.
So that's it folks, this is what I have been  spending my hobby time on this past while. On the horizon (or possibly many horizons away) is my AM Valkerie and some assorted ne'erdowells to hang around the diner causing 41st Millennium mischief. So until next time.

Greetings. Some more progress with regard to my little toy soldiers has been made, but none of the newly finished are soldiers, just vehicl...