In the Grim Darkness of the 41st Millennium, Crows Still Need Scaring, Umbrellas Still Need To Be Manufactured

So the war against unpainted models continues, this time with some mainly non military types to try to sneak onto good honest battlefields at the expense of the professionals. So below you will find various goons to decorate my battle reports.

More Hybrids For The Revolution

The Assembly of D'Keddes gained a couple more recruits, a proper old metal Neophyte that was sculpted before GW gave any thought to intellectual property and therefore wasn't called a Neophyte, just a plain old Hybrid. As is my current want I have been tarting up some of the bases on my models, in this case the severed banner pole from my Attilan Roughrider command, this serves two purposes, firstly it gives the impression this guy has been involved in the indiscriminate murder of horses and secondly he can double up and a standard bearer in his own right. The other models is a Kelermorph, I already have an original for my army, but what could irritate my gaming group but another one? It is made of an old Necromda Delaque heavy whom I purchased on Ebay sans his heavy stubber. A root around in my bits box gave me an AdMech head and pistol plus some Hybrid hands. Voila! Another freedom fighter to protect the downtrodden masses (before they are horribly melted down in to alien soup).

A couple of years back I bought some old metal scavengers from Moonraker miniatures who now seem to be Forlorn Hope Games. They are brilliant sculpts and absolutely drip character. In the grim darkness od the 41st Millennium they will probably be cultists - chaos and otherwise - as well as freedom fighters, pirates and other ne'erdowells. The model on the left is my all time favourite model in the range and could even get his own miniseries. I don't think I would be likely to paint these models were it not for contrast paints and inks, these sculpts have lots of very detailed bits and bobs on them making them quite a chore with these old eyes of mine. For the young 'uns though I would recommend getting some.

Some years ago our gaming group took a punt on Infinity by Corvus Belli, several games were played and models bought (not necessarily in that order). I plumped for Tohaa, an alien race that use pheromones and viral weaponry (nice, huh?). So soon after I got my Tohaa I discovered how much insane detail was on them an so they got sprayed white, then mothballed due to the next new shiny thing. Once again some random movement of figures made me pick some up and bring them to the painting pile. Here is the result. Not sure how much appetite within our group for infinity there is but three more models crossed off the to do list.

The models below go partly to explain why I have yet to finish an army. My mind sees something and I think I could use it for scenario x or project y . Sadly the time it takes for me to complete whatever the thing is I've bought, I get sidetracked into repeating the same process again. So below are a scarecrow (possibly TSR) that was to be used as some sort of demonic thing for WFB, or an alien surveillance device for a 40K Imperial Agriworld. Either way it may or may not adorn a field in an upcoming game. The other is a Shao Lin monk from a now defunct miniature company called Iron Mammoth Miniature. He is the last of 6 that have been gradually been painted over the last 5 years. One peculiarity of these models is their slightly longer than normal that give them an alien shape changer vibe which could fit into my Rogue Trader projects.

Now that they don't seem exist anymore in Necromundan lore, I have finished a Malcadon Spyre hunter. I also put one AdMech arm and a High Elf one, on an old  Confrontation Brat ganger. Two very cool sculpts who will probably find their way onto this blog in some strange capacity that isn't 100% clear to me at the moment. Perhaps Astra Militarum wannabes or members of a Halloween Revolutionary Force, intent on a Coup D'Etat  some time in October. 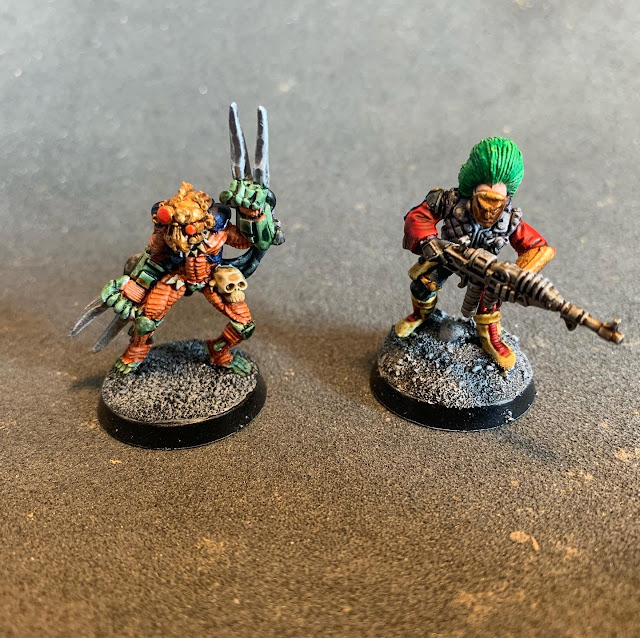 So that's all I have to show you today, hopefully it will give some of you a warm nostalgic glow that may have sparked some joy. Or not.

In the Grim Darkness of the 41st Millennium, Crows Still Need Scaring, Umbrellas Still Need To Be Manufactured

So the war against unpainted models continues, this time with some mainly non military types to try to sneak onto good honest battlefields ... 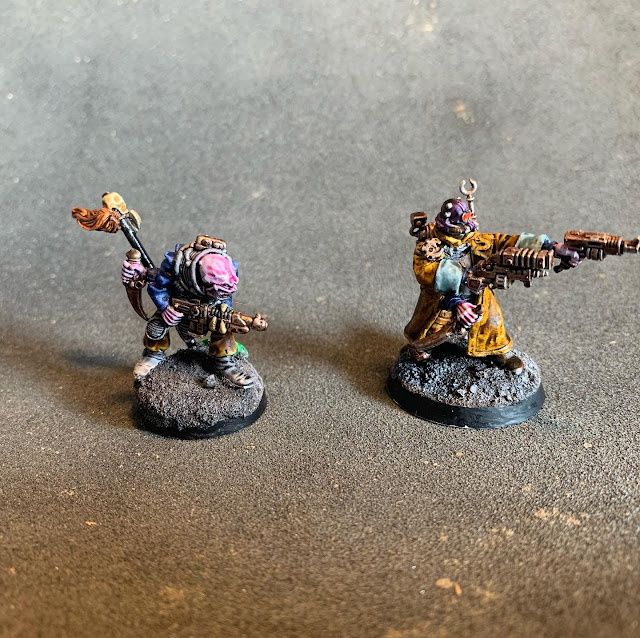