Greetings, welcome to another  episode of "What I done in 2021", one of those unsolicited things you get on the internet, like Nigerian princes and flat earthers. This update is of a xenos flavour, so here we go;

Some 5 or more years back I played a lot of Warhammer Fantasy Battle with my Wood Elves, Skaven and Lizardmen, hence I had a shit ton of Saurus. I still have but I decided to chop up some plastic monopose Saurus to create some lesser known hybrids for my Genestealer cult army. There have been a few mentions of Tarrelliens in the fluff of 40K. They are described as  lizard like chaps who are part of the T'au empire. Due to many misunderstandings with the Imperium involving attempted genocide and persecution, they have a deep hatred for all things human. They sound like they would make ideal sex toys for an enterprising Genestealer Patriarch. My own cult army (The Assembly of D'Keddes) have chanced upon a small colony of Tarrellians and absorbed them into the army over the course of several Tarrellian breeding cycles. So that's the story. feel free to pick apart any flaws in my story.
One of the best lings about the Saurus models is thier heads and right arms come off easily allowing for hybridization. In fact, the genestealer genetic material almost invariably affect the head and right arm of the Tarrellian host species. Hence the remarkable unformity of hyrids right armedness. The three below are a standard head and arm swap, and two more ambitious left and right removals which required some greenstuffing as well. The centre hybrid also has purestrain feet and his own perch to chirp from.
The next three have various conversions but I like the one on the left as I stuck a hybrid arm without removing the burly Saurus one so it looks less mullered and more natural (if such a term can be used with hybrids). The centre has a big claw and a stolen Space Marine laspistol (back when the Imperiums finest were using non bolter equipment due to budget cuts). On the left is also blessed with non Tarrellian feet and is balancing on a rock and what looks to be a Lamenters back pack.

The central hybrid below has some features worth noting. Firstly the blue clawed leg cocked at a jaunty angle is the forearm of one of the original plastic genestealer kits from many moons ago. To distract from the probable comments about it having a rather weird gait I fashioned a small many eyed creature in front of it to dissapate unkind comments. The tiny little eyes are from Green Stuff World and will probably be featuring in other alien/mutant constructions in the future.
Next is my pre-emptive attempt at the rumoured Genestealer saboteur and my Primaris/Abberrant Hybrid. The first in an old Necromunda Goliath conversion while the other is a Primaris/Abberant msh up with plenty of green stuff thrown in. The Abberant will make my secong Hypermorph and is the infortunate brother sergeant Buttafucco, previously of the Blood Angels, but now a freshly baptised member of the Assembly.

Some Barrells, That May Be Rolled Out.

Some Hirst Arts barrells made out og cheap bonding plaster that were simple as piss to paint 5 years after I built them. I borrowed the molds from Stuart and may well revisit the whole terrain in a mold things, some Wyldwood paint and metallics had them done in record time.

Some Druchari Reavers next. Since the nest codex came out, these are a must have for the army. This group are particularly daring, having stolen two Aeldari D Cannons and mounted them on their bikes, I can see the Aeldari players in our group taking exception to that (I hope so anyway).


So that's my progress for September, and also my entry for the Finish Your Stuff Challenge over on Yaktibe. So until next update look after yourself and thanks for reading.
By Jason F at September 30, 2021

Greetings, welcome to another  episode of "What I done in 2021", one of those unsolicited things you get on the internet, like Nig... 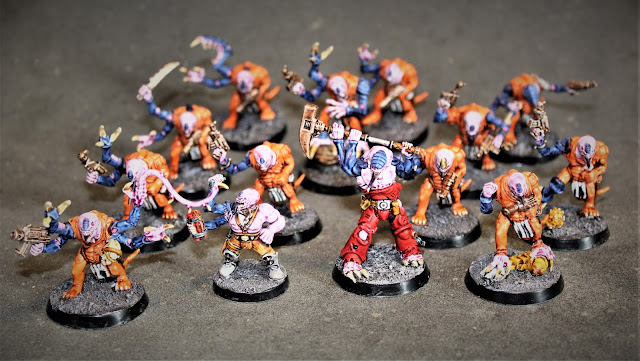