Evening all. Fresh off the incredibly slow production line come some more WFB items. These models were started pre-AoS so I'm really living up to the blog title at the moment. Anyhoo, here are some creations of mine that could be considered at least 40%

Several years ago I discovered green stuff (well not really, I found out about it). I than proceeded to spend an inordinate amount of time working out how to create stuff, become a professional sculptor and then create my own miniature range and become rich. None of these things really happened except  for some marginal progress in the sculpting department.

Master Moulder Snippet Kwik liked to improve his creations with warpstone, nails and superglue. So these first two subjects  have some oversized fangs (probably from the Olde Worlde version of a reverse walrus, and an Orc head stitched on, due to the unnatural resistance of the greenskins and lashings of warpstone paste this critter survived. 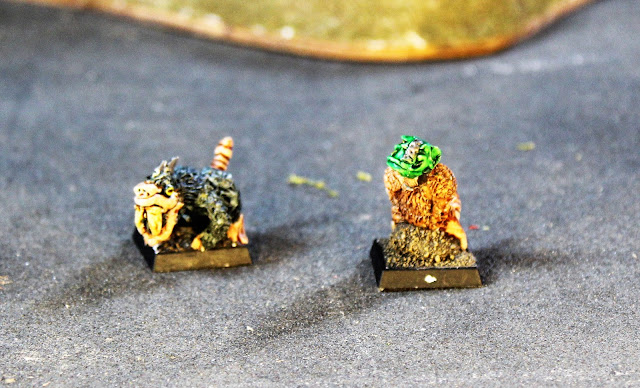 Next up is a mole-rat and a rat with a giant spike on his head. Giant rats are very promiscuous so the trick in Clan moulder Beastmasters eyes, is finding an equally promiscuous giant mole. If you can do this then Bingo! A litter or two of Giant Mole Rat puppies. 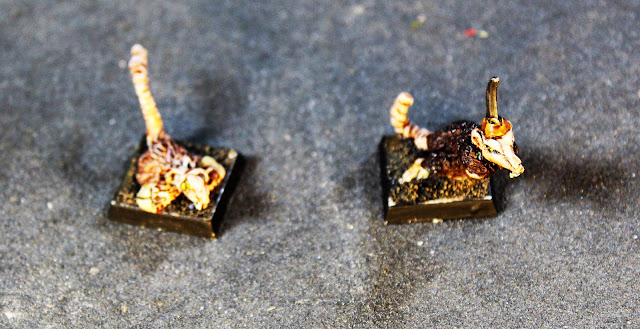 One of the biggest issues within Hellpit is trying to get their pets into combat as quickly as possible, experiment #9 was a surgical graft of a horse and giant rat to increase it's speed. this was partly successful but as the horses legs are far longer than the rat's, it has limited viability. Sadly Snippet Kwik had found that the design led to many instances (8 in fact) of the back legs toppling forward and literally scraping the front half into a fine mush before the unfortunate creature expired. Number 9 however had the added rat tail for balance. 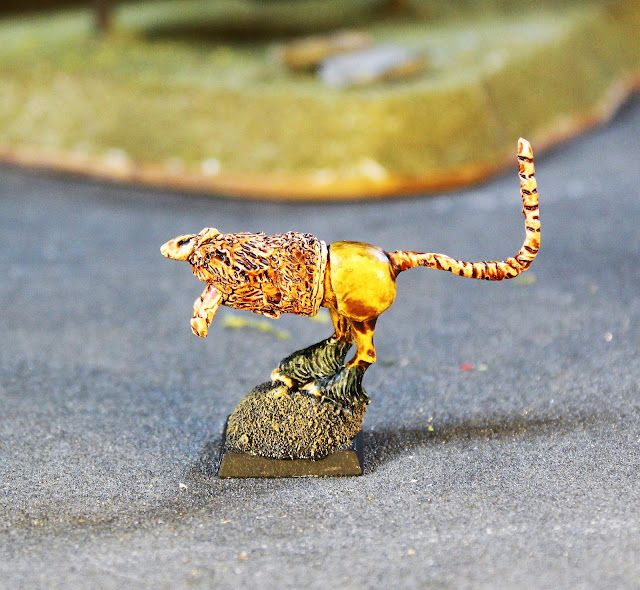 The next two "giant rats" are results of a couple of underlings incompetence and then stupidly not having the sense to blame someone else. This resulted in them having their head grafted onto host bodies. It's not all bad though, each one had a weapon attached to a front limb. The one on the left even got to keep his hat. 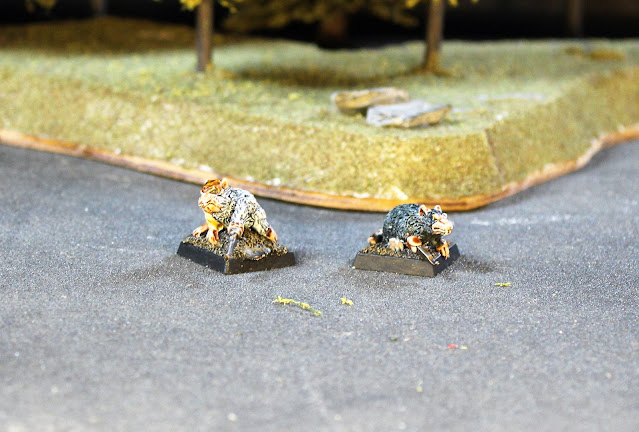 Next up subject #32 answers the question "Can a Giant Rat body support a Rat Ogre head?". The answer is no, the head in question was far too bulky to be supported by a single giant Rat body. So ever the enterprising inventor Master Moulder Snippet Kwik stitched it to two bodies and hey presto! Another successful creation!

Finally, not another experiment, but rather a heroic member of my Elven Host. Rimphi the Stoic is my battle standard bearer. Originally a Wardancer, Rimphi was part of an force battling Warriors of chaos and Beastmen in the northern glades. Foul magic slew the Glade Captain bearing the banner of Lord Silias and Rimphi nimbly grabbed the banner before it fell by vaulting into the dying steed's flank and jumping back to the ground before it's death throes could crush her. Mainly due to this act and the Wood Elves were victorious and the followers of chaos were defeated. Lord Silias then made the unprecedented request for Rimphi to  become his personnel banner bearer and she accepted. The model itself is an old Wardancer model with a banner with the top of Teclis' moonstaff on the top. Although I can't use the model as a Wardancer BSB she will be see some action in my someday-to-be-finished Eternal Guard unit.

So that's all for now, these models will hopefully be making their way to a fantasy battlefield near you in the near future. So hobby responsibly until next time. Thanks for reading.