Recently had a game of Warhammer that was, to say the least, a bit unusual. The game was before the new Wood elf book came out but I was using a comp for a tournament that I was going to play in, simply put it was pretty similar to the new book, ASF and use of the 8 lores of magic. 3000 points. 1500 points wood elves (mine), 1500 brettonians (Stu's) vs 1500 points Daemons of Chaos (Phil's) and 1500 points of Warriors of Chaos (Aaron's).
The Brettonians had 4 units of knights a trebuchet and a damsel (life), I took three units of *archers, 20 dryads a unit of Wardancers and a level three Shadow mage.
Warriors of chaos consisted of 25 marauders, 20 chaos warriors, 8 hounds, 4 Chaos Spawn, a chimera and a daemon prince. The Daemons were a Slaanesh force of keeper of Secrets, Daemonettes, mounted Daemonettes & Fiends.
Despite the game being played as two teams of allies, I mainly deployed to the west of a river, the Brettonians to the east. Similarly, the WoC deployed mainly opposite me, the DoC faced the Brettonians.

The Forces of Destruction got the first turn (the Brettonians were praying or something whilst the Wood Elves stared at them with a collective single raised eyebrow). So the frothing rabid forces of chaos ran pell mell across the table. The daemonettes on mounts moved easily into charge range of the archers on the bridge. The Keeper of Secrets made an attempt at being inconspicuous by trying to blend in with the tower.  There was little or no magic or missile fire from the unwholesome side of the table, one thing of note was the mysterious river turned out to be a river of light which didn't make it the ideal piece of terrain for the chaosy armies. In our turn I focused fire on the chaos hound unit as they seemed to be the most likely unit to get into combat soon as the chimera was skulking behind the Marauders (as much as an enormous three headed monster can skulk anyway). I killed 1 out of the 5 mounted daemonettes about to bring pain to the Glade Guard on the bridge. The Brettonians ponced forward in a typically heraldic display (even though they weren't painted).

In turn 2 the mortal followers of chaos made their slow relentless march towards my lines. The chimera charged the advancing knights on the left flank. The advancing Brettonians weren't up for that at all and ran off the board. The daemonettes on mounts charged the Glade Guard on the bridge (henceforth to be known as the Fot'ltpb'm'tarorco't or in manspeak Fellowship Of The Liquid That Provides Benevolent Magic To All, Regardless of Religion, Caste or Temperament). As we are playing the Vaticon comp for Wood Elves they get ASF, coupled with the Daemonettes completely cocking up their attacks, my Glade Guard managed to defeat the daemons, but they wouldn't budge. The Brettonian general's unit charged the Keeper of Secrets, the rest of the movement in our turn involved moving forward a bit (Brettonian knights), shooting a bit (Glade Guard & Trebuchet) and standing around a bit (Wardancers & Dryads). My eagle charged the chaos warriors to (hopefully) prevent them charging the knights in the following turn. The KoS very nearly killed the Bretonnian general in the first round of combat, but due to him passing 1 ward save he heroic mighty blowed the crap out of it winning the combat (an in all probability this half of the table). A unit of Brettonians charged the Daemonette unit, beating them by a small amount, but not enough. The ASFing GG destroyed the Daemonettes, then reformed to face the chaos hounds who were getting ominously closer. DUN DUN DAHHNN!!!!


Turn 3 was when things started getting a bit weird. The chaos hounds charged my archer unit on the bridge.  The Fiends in the centre charged my Wardancer mage bunker. The Wardancer unit was to prove that it was perfectly capable of fighting the Fiends, winning combat. Despite killing a few more hounds in the stand & shoot reaction the hounds piled in and killed some archers, breaking the unit. They did what any self respecting missile unit would do and fled directly into the River of Light. That's when the batshit stuff started occurring. The river cast Light of Battle on the fleeing elves, instantly rallying them. Then there was a certain amount of what happens now type postulations, the upshot being that the chaos hounds couldn't pursue as the unit was now rallied, so they had to stop 1" away from them still on the bridge. The Brettonian general (avec knights) charged the chaos warriors with my great eagle in tow. Also in my turn my archer unit declared a charge on the sulking chaos hounds, another archer unit entered the tower. The combat between the knights fighting the daemonettes ground on.The unit with the damsel sloped around the back, the fourth unit of knights were still presumably galloping home to their wetnurses. The GG now got their revenge on the hounds killing all but one, and sending it fleeing into the river only to be thwarted by the river casting Light of Battle again with the same result as before! The Wardancer/Fiend combat continues with the elves winning & causing more instability damage on them.


Turn 4 saw the chimera charge the Glade Guard unit, and with some outstanding dice from me, killed it before it got into combat. The Marauders charged the Dryads. The lone chaos hound recharged the GG. The wingless daemon prince ambled up behind the marauders as did the BSB. It is probably at this point fair to state that this was Aaron's first WFB game. As such any tactical mistakes on his behalf are more my fault for not pointing things out during army list composition and/or set up. Despite charging, and having a +3 rank bonus the marauders didn't do enough damage to the Dryads to break them. I daresay flails would have made a big difference to that. On the other side of the table the chaos warriors fought the generals unit aided & abetted by the great eagle. To my delight the Wardancers finished off the Fiends (this was probably the worst unit for them to attack as -WS on the Wardancers still lets them hit on 3+s, plus immunity to psychology helped). It was in this magic phase that I managed to cast The Withering on the Daemon Prince and due to a definite lack of magic users on his side, I was successful. what was more I managed to lower his toughness by 3, making him as resilient as a skink! This was to prove important. 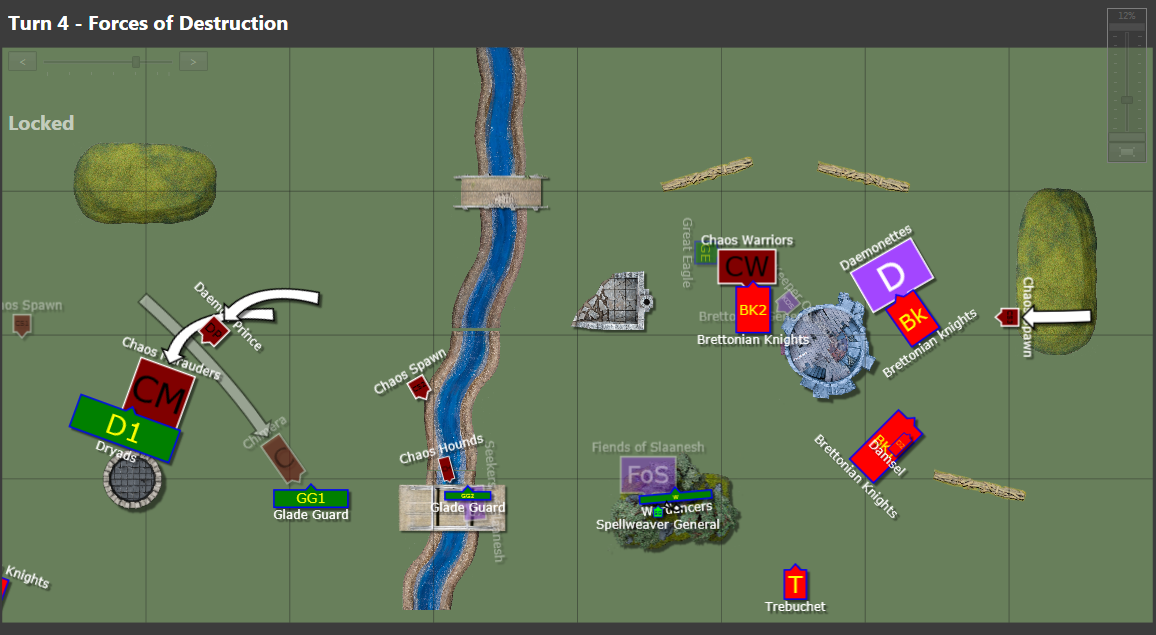 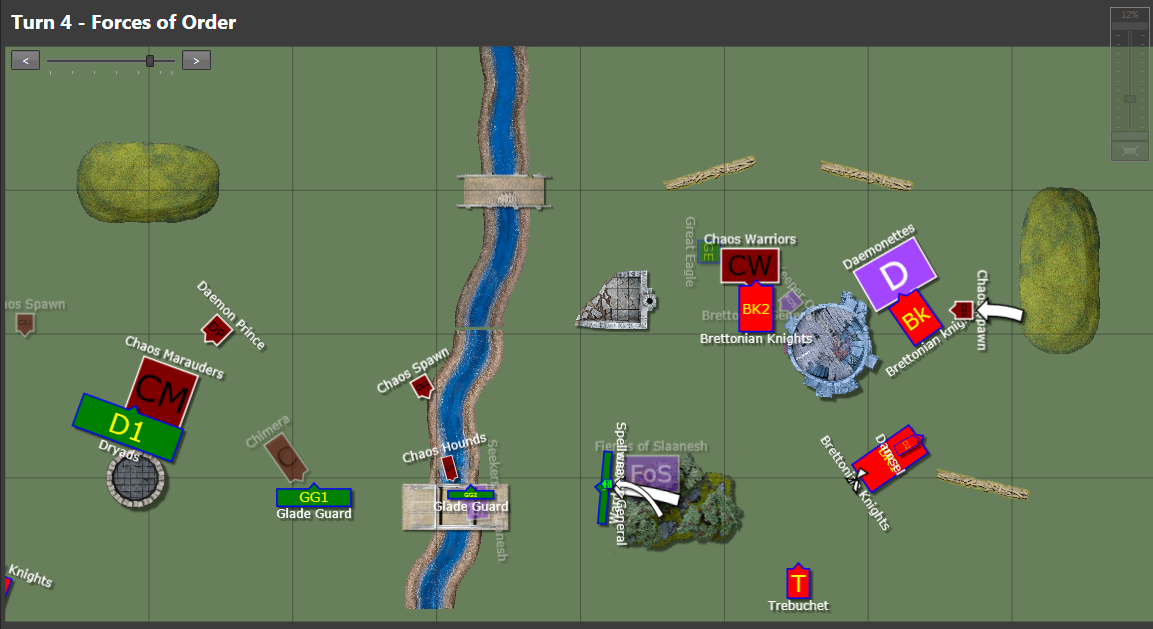 Turn 5 was all about the close combat, as a chaos spawn ambled into contact with my archers on the bridge. My Dryads broke the marauders, pursuing into the weedy daemon prince (I don't get to say that a lot). The Spawn broke the archers who promptly fled & rallied a la Light of Battle again. The daemonettes broke the knights with the aid of a chaos spawn. In two rounds of combat my Dryads mullered the daemon prince. We called the game there as time was up and the game had a decidedly one sided look to it.


*Although I very much like battle chronicler after about seven attempts to get all the units on the map I couldn't do it as each time a unit was removed by the program (or my own ineptitude). The one unit of 10 wood elf archers started the game on the bottom left side of the table, entered the building an never left it. they were as far as I remember the slayers of the Spawn on the left.

Posted by Jason F at 11:54 No comments: Links to this post