Below is my Wood Elf list for Nordicon 3 , which is on tomorow. A full tournament report will hopefully follow.
I used Battlescribe and copied it from my email so this is the format which can either like it or lump it!

Posted by Jason F at 23:57 No comments: Links to this post

The start of something, er Nautical?

I have over the last while been interested in playing Warhammer on the high seas. As with my Athel Loren project (18 years, still in the planning stages) it will probably take a while. But I have made some progress! Still very much in the building stage are my skaven warp steamer and my elegant wood elf er, yacht. Observe:

Below is the preliminary construction of my skaven ship Sludge Scraper. Made by spacing semi similar shapes between some other pieces of foam card then gluing some cardboardas the hull. Plenty of balsa and bits of card to represent metal plates and a warpstone boiler will hopefully make this baby come alive.

This rather pretentious name has just come to me as it's the middle of the night and I can't think of anything better. My other boat was an ebay find that cost about 4 quid. It is in need of a couple of dowel masts and sails then it can happily swoosh along the rivers of the Old World doing the will of Ariel & Orion. so alongside some of the many other projects I currently have in progress, ship building is added to the list!

So I will hopefully be putting some more work on these in the near future. As long as some other awesomely important thing steals my attention away from them.
Posted by Jason F at 01:51 No comments: Links to this post

Some long term squatters on my to-be-painted table have finally made it off it! So in all their glory, some tiny soldiers to make me swear at dice on a table top.

Here is my witch hunter model that was part of a tag team in the old Dogs of War army. I can't recall either name at the minute but his buddy will so be conscripted into the army as a warrior priest. An internet high five if you recognise the name from an old British sitcom.

My wyrd is now ready to ravage the underhive as is Little Nug, who I think is more of annoyance than an actual thug. Nug is an old plastic Gretchen model with the head of an Empire Light Acolyte squished on it. A greenstuff scarf gives him the look of a guy hiding the fact that someone tried to hang him at some point, but with little success.
.

Three empire archers to go with the dozen or so I have already painted for my ad hoc Empire army. These guys are painting table veterans that have probably spent 18+ years waiting for brush love. now they've got it, they had better not flee at the first sign of a terror causing gribbly! I really like these models as they really give me the impression that they don't know much and say "B'ain't" a lot.

Finished this Brettonian organ gun some 20 years after they ceased to use gunpowder and moved into Trebuchets. Nothing says backward like Breton peasantry. Nice models these. I have another three artillery pieces to flesh out my Empire. Unfortunately it seems the only Warhammer race that now use organ guns are dwarfs so it will have to be proxied as a Hellblaster volley gun instead. This is actually my most dangerous model as I've been stabbed several times by the cocktail stick stakes! It ranks very highly in the psychotic goblin spearmen danger rating. 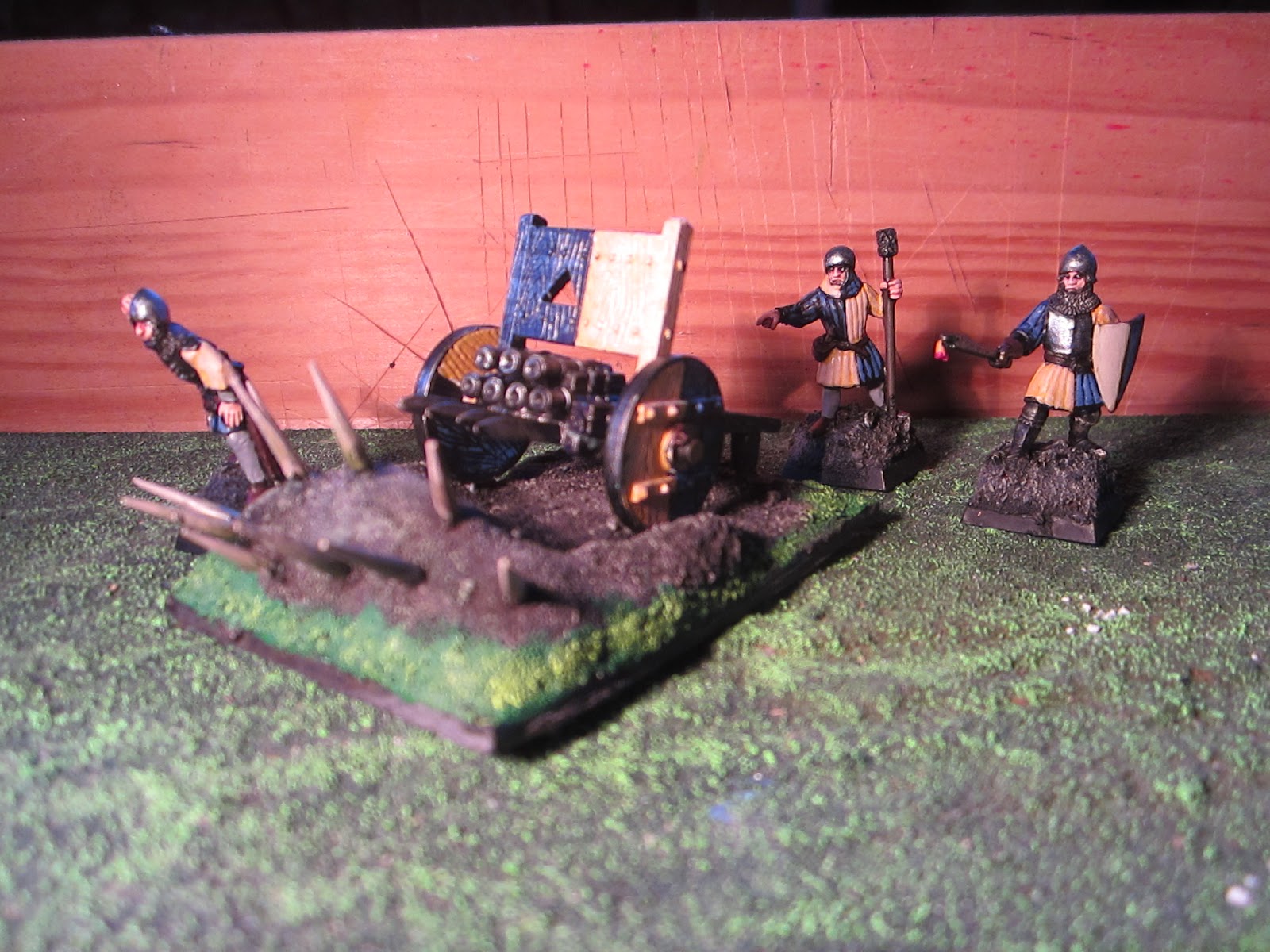 What's next on my painting pile is some wood Elf Glade Guard (more veterans of the Long War Against Undercoat), some Warhawk Riders, Wild Riders and Sisters of the Thorn. so hopefully in the next couple of weeks Ican have a very Elfy painting entry. Until then........
Posted by Jason F at 00:40 No comments: Links to this post