My moldlines brings all the boys to the yard!

Howdy. My rather lackluster painting progress has finally improved! Yes, I've managed to get a few off my to do list. So here's what I done;


Brood Brothers
My Genestealers have been bolstered by some rather ancient Imperial Guard models. A purplish tint to the skin and some dull clothes denotes these are members of The Drabb Butchers - the name of my cult that are an offshoot of The Innerwyrm Cult, hailing from an abattoir world. You will probably notice there is a trooper pointing forward with a 33% arm addition. This is trooper Urkk, he normally tucks an extra arm under his uniform but he just got  bit excited in this picture.

Patriarch Glurcastes was troubled, his long planned insurrection was imminent but several seemingly unrelated chances put the plans into turmoil. Firstly, was the unprecedented comet that had bathed Skorlax in poisonous radioactivity that wiped out 97% of the human populace here. The alien genes of his family had protected them from the worst depredations of the comet but rendered his hybrid children sterile. The only hope to propagate his line was with the dozen or so pure-strain genestealers that remained. Then came the invaders, first Aeldari, shortly followed by Orks - who gave battle on one of the larger urbanizations on Skorlax. As the Aeldari fought and defeated the Orks more and more green-skins made planet-fall to do battle. When vast numbers had dropped onto the surface of Skorlax, the Aeldari disappeared. Knowing that a large force of Orks on the planet would ruin any attempt to contact the star children, Glurcastes sent out the telepathic summons to all his kin. Leave the mines and eradicate the invaders!


The first Battle of Skorlax was an  attempt by the Seer Council of Ulthwe to entice (sub)Waargh Tonkwappa into a large scale ground invasion. To deal with a threat that directly affected Ulthwe holdings. That threat (as is evident by the blurb above) is Genestealers, in the form of The Cult Of The Four Armed Emperor. I had recently purchased the new Codex and Dylan obligingly gave me a game. As the Ork Codex was new also both of us would have little idea of what to expect. What would be a given though, is that there would be plenty of close combat! 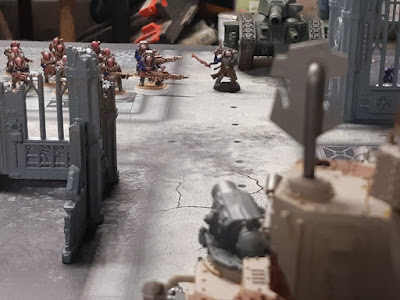 Read more »
Posted by Jason F at 10:31 No comments: Links to this post