Battle of The Lords of War 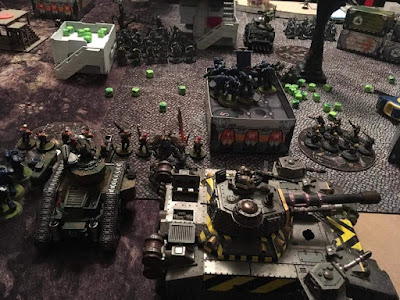 Greetings. A few weeks ago, my gaming group gathered round Stuart to give it death with abandon. My Astra Militarum allied with Billy's Ultramarines to protect the Imperium from the foul depredations of Mortarion most disgusting of Primarchs and an offal cart full of daemons and Death Guard, led by the dynamic duo of Stuart and Dylan. Giving sage advice on the sidelines was Alan. Now, I've found four player games tend to be a bit more confusing and shouty so a lot of the tactical nuances are missed by me and pertinent facts left unsaid. So with that in mind I'll let the pictures tell the story of the short and bloody battle.

Sometime around turn two Billy deepstruck two powerful Ultramarine characters to assassinate a Daemon Prince and GUO They were both pretty tasty and Billy's Librarian attempted to cast a psychic power to give them a reroll to his charge plus bonuses in combat. Sadly the power failed and left the Lieutenant up shit creek as he failed his assault and both models were duly trounced by the tag team of pus. Sadly I can find no pictures to support this anecdote but I'm sure it happened and I didn't dream it.

The game was conceded in turn 3 by the forces of farts and snot. In retrospect the first turn was essential. Virtually the entire Imperial army targeted Mortarion killing him. Only just. The Baneblade is an awesome tank, especially with Rouboute Gullimann holding it's hand. One thing I have decided on is not using one again for a while as it is pretty domineering on the battlefield. Had Morty gotten first turn it could well have been the Imperials that quit turn three. There is definitely a massive advantage to going first.

Thanks for reading.
Posted by Jason F at 11:11 No comments: Links to this post

After having two battles recently where all my characters performed fairly well (reports incoming) I thought I'd immortalise them before they cark it! So in the hope that they have long and distinguished careers in my own part of hobby heaven, here are some of the important members of the Scargill Planetary Defense Force, Kinnock region.

Balto Krudditch is a career soldier, never and overly imaginative or charismatic leader, he still has the ability to get a lot out of his troops. He comes from one of the wealthier families on Scargill and has custom made weapons to which he is known to use with considerable skill. He usually goes into battle using his custom powerfist and a family heirloom plasma pistol which has been microengineered to seem nothing more than a lowly stub pistol. Although 'technically' Krudditch hasn't actually fought in hand to hand combat yet, he is sure he is up for the job and will make his father; Gumbah Krudditch proud.

Revs Cantalope is a newly promoted tank commander (so new I haven't converted a model to use for him yet) that has distinguished himself in recent conflicts. His Leman Russ The Painful Reply is a Demolisher variant that has sent many enemies of mankind back to whatever heathen afterlife they believe in. The relatively short range of the Demolisher suits Cantalope's aggressive style of battle.

Vim Ajax is one of the few authorised Primaris Psykers on Scargill. Originally from Scargill's outermost planet : Gruesome Discovery. Ajax was recruited into the sectors capital defense corps once his manifest abilities were discovered. Ajax is usually accompanied by his pet Thoutwyrm, a sanctioned xenos lifeform that augments his mental abilities. These creatures are semi sentient beings that have the ability to siphon off negative mental thoughts and instill feelings of euphoria instead. How or why they are able to do this is still subject to conjecture by xenobiologists, but Thoutwyrms have been utilised in the Scargill Sector for many decades.

Nimrod is the eccentric commander of the Scargill PDF Gremthorpe protectorate platoon, also known as the Rockworms due to their ability to dig in during battle, taking fewer casualties. Nimrod himself does not fit the image of a typical soldier with a thick beard and the tribal garb of  the hill men of  Scroxix in Gremthorpe. Despite his rustic appearance he is a fearsome warrior and able tactician. He is armed with a plasma pistol and his right arm has a cleverly disguised power field built into the wristband on his left hand that counts as a powerfist.

The good 'Sarge' is a large brute of a man. He is a fierce combatant and bears all the characteristics of the Catachan legendary warrior of the similar name. In fact some say Sergeant Barker has styled himself on Sergeant Harker. He is armed with a particularly lethal weapon he has named 'paycheck' and has assembled a group of like-minded soldiers he has dubbed Barker's Beerraisers.


So here are some more models in my collection given names to make them seem more real to me. Hopefully they can help keep Scargill human and make sure filthy xenos don't lay claim to something that humanity may or may not have stolen from another civilization thousands of years ago.
Posted by Jason F at 16:46 No comments: Links to this post