The Raid of Proxxi Tower.

Had my first game of WFB using the new Wood Elf army book last week. I was in uncharted territory as I was playing Chaos Dwarfs (never played against them before), with a new army book (with only the internet for guidance), playing the Watchtower scenario (for the first time). Here's how I got on.

As this was my first outing with the new book I just took things I have some experience in to judge them afresh. The overall tactical plan for the army was weaken the army with bow-fire, utilise the woods to create favourable combats, use the Dryads as an anvil for anyone coming too close, use the Wardancers in tandem with them to negate ranks, and hopefully win/break units. Then we rolled for the scenario and my plans went a bit awry, it was Watchtower!  The Chaos Dwarfs got the watchtower basically making me have to try to get him out of it, so much for letting him come to me!

Up against me, was my opponent Phil who took a Chaos Dwarf army. To say there were quite a few proxies is an a bit of an understatement. What he took was:

A large unit of Chaos Dwarf Blunderbusses were ensconced in the tower with the other unit to the right of it. A unit of Bull Centaurs either side of the tower with the Destroyer centrally placed to mess my elves up bigtime. My eagles were deployed on each flank and both the scouts and waywatchers were positioned on the left to hopefully destroy the nearest unit of centaurs. My Dryads were directly in front of the tower with archer and wardancer support around them. My Arrow of Kurnous took a wound off the Daemonsmith which was a nice start and got my hopes up for the game. 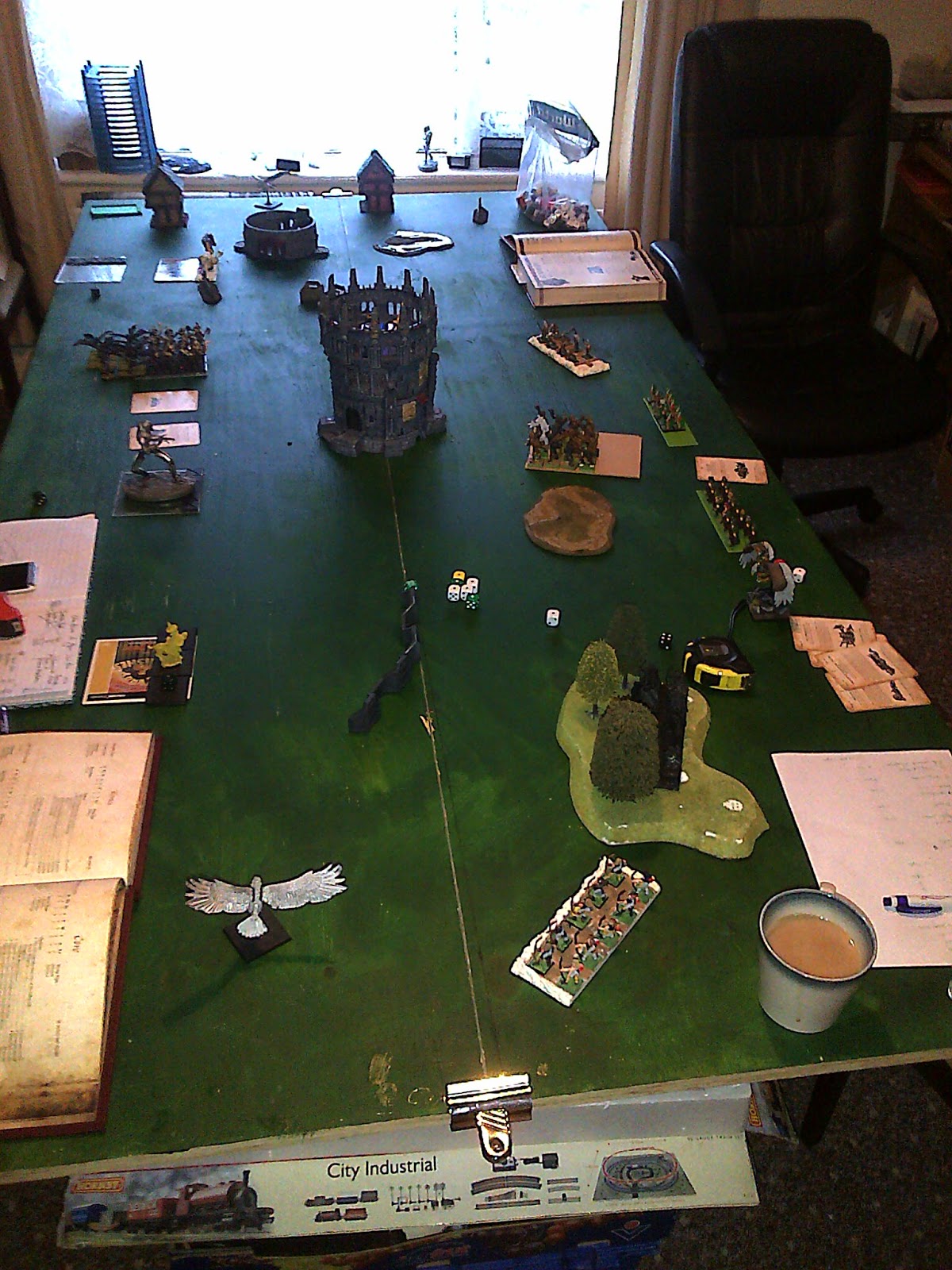 I got first turn and immediately advanced the Dryads to assault the tower in turn two. Sent my eagles to distract the centaurs and started my shooting. What? No magic phase? The Chalice of Blood & Darkness basically shut down my magic phase, stealing 2 or 3 power dice from me (this was to become a common feature of the game).  Shooting killed some Dwarfs in the tower (rerolling wounds helped a bit with this) unfortunately shooting the Bull Centaurs wasn't so fruitful causing a single wound on their 3+ armoured hides! The Chaos Dwarf's turn consisted of moving up and the blunderbusses killing about 10 or more Dryads. Yikes! Magic may have killed a few more elves to fireball but due to the Bastard Chalice - my new name for it not many spells were going to be successfully cast this game. 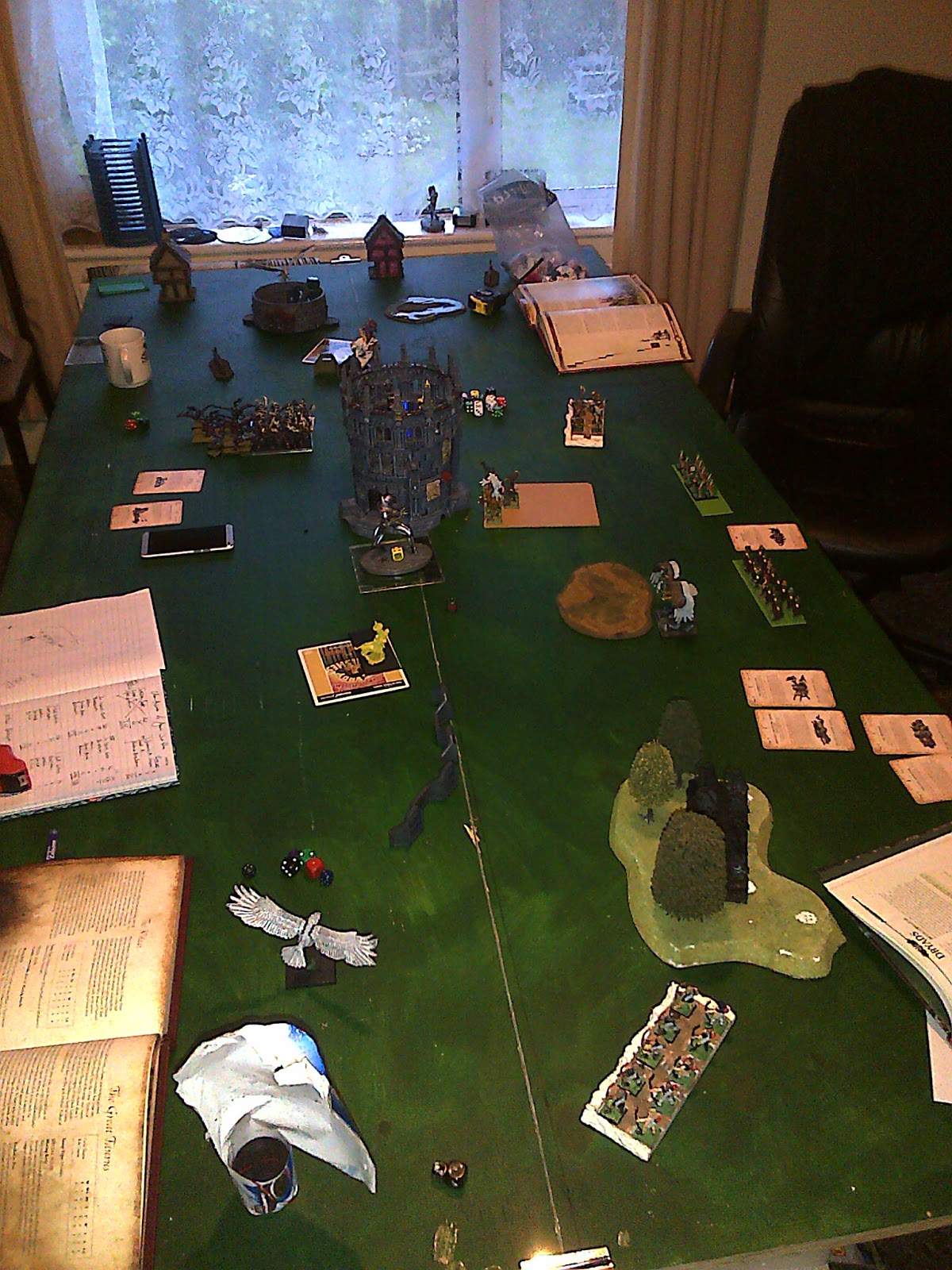 I charged the now very much depleted Dryads into the watchtower hoping that hatred would see me through the barrage of Chaos Dwarf shrapnel and start beating the snot out of them. I also probably should've tried to charge the K'Dai with my eagle rider, but instead opted to take charges from the safe side of the Khemrian quicksand. Maneuvered the eagles for flank charges in turn 3. The Blunderbuss stand & shoot was devastating, leaving me with 5 or 6 Dryads to assault the building. My shooting once again proved ineffective against the Centaurs. To add insult to injury close combat saw the Chaos Dwarfs kick the piss out of the Dryads effectively ruling them out as an assault unit. The Chaos Dwarf centaurs pulled off two long charges on my Wardancer unit (which I had conveniently angled to allow any possible overrun into the Glade Guard flank), and my Eagle rider by the quicksand. I wasn't overly worried as I thought with ASF and a 3+ ward save, they could probably hold their own enough for me maneuver around them. 5 out of 8 failed ward saves later saw the Bull Centaurs crash into the side of the Glade Guards. The Eagle Rider challenged but lost the combat, didn't run though. The only ray of light in this turn was the Destroyer took a couple of wounds from internal combustion.

Turn three saw me desperately try to salvage something from the game. I moved both eagles to reasonable charge distances to the Bull Centaurs, and advanced my scout and waywatchers to get more involved in the shooting of Chas Dwarfs. My battle standard bearer barged (if a wood elf is even capable of barging) his way into combat with the bull centaurs, meanwhile the units capable of shooting did so with limited effect. I managed to cast Enfeebling Foe which enable me to draw combat with the glade guard and centaurs, sadly my eagle rider lost the combat and fled with the pursuing centaurs overrunning into my mage's unit! when will I ever learn to move units out of the possible charge routes? Also I stupidly let my eagles into shooting range of the blunderbusses. Two dead eagles. Amazingly the K Dai failed his secong toughness test and expired! Without even getting into combat. Shoddy Chaos Dwarven Daemonsmithery! Some good rolling saw my Glade Guard route a unit of (read one) Bull Centaurs, whereas the other unit routed my other unit of Glade Guard after squishing the BSB in combat. On a plus note the sorceror blew up with an Irresistible Forced fireball. Thank Odin for Arrow of Kurnous!

The last two turns were essentially me trying to shoot the Chaos Dwarfs out of the Tower whilst avoiding the amorous advances of the Bull Centaurs. In this I was only partially successful. The scouts and waywatchers survived but so did the rather smug Chaos Dwarfs in the tower. Victory to the Bastards of Hashut!

I think the main reason I did so badly in the game was my own perceptions of how to win. I thought, charge in, kick the Dwarfs out, then jelly & ice cream for the Dryads. Had I taken a more measured approach I could've ignored the enemy in the tower and concentrated on everyone else. Due to a lack of forethought I let my eagles and Dryads into the abysmally short range of the blunderbusses, who are absolutely lethal when they do shoot. If I had not tried to assault the tower until the 4th turn I perhaps could have dealt with at least one unit of Bull Centaurs and the outcome may have been different. Another consideration is my choice of magic lore, admittedly The Chalice of Blood & Darkness is my least favourite magic item (at the moment anyway), which severely hampered my magic phases. I think High Magic has more versatility and I will be experimenting with that for a while.

Final thought is that Chaos Dwarfs are a resilient army that are hard to dislodge from buildings, but had I gotten to garrison the tower, the blunderbusses short range weapons would have ensured a closer fought battle.