Greetings. As we near 2020 many blogs contain some sort of status hobby update and this one can join in. I did one in 2017 and failed to do one in 2018 so I can't call them annual. Probably Biannual at the moment. 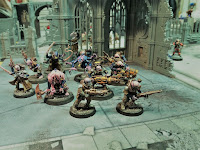 Well I've managed to paint over a hundred models this year. Mainly Genestealers or members of the cult. I managed to get some Aeldari done too but mainly the bulbous headed destroyers of humanity. Citadel contrast paints helped me achieve this. Some of the first models completed this year was some Brood brothers and assorted humans (and not so humans) to join the glorious revolution that was the Genestealer Awakening (or whatever). Some Necromunda models were also completed including Karloth Valois who will be murdering for the Imperium when I next use Astra Militarum in a game of 40K. There was a good bit of focus on the GSC as I really like the models and they are hard as nails in the game. Quite a lot of Aeldari was coloured in also and they saw a bit of table time interfering with the lesser races. I painted up rangers (scouts) Swooping Hawks and Jetbikes. All great for being mobile and sneaky. 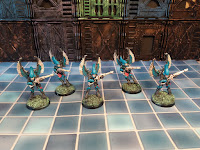 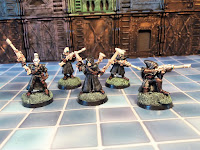 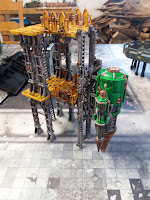 Well not the catwalk kind, the making-stuff-out-of-other-stuff type thing. Can't say I've really created  much, except for the little Catachan Brainleaf over on the left. I'm pretty pleased with how it turned out but it hasn't been used on the tabletop as a very dangerous plant intent on taking over the brains of sentient lifeforms to prune themselves. I've done a bit of painting some kits; Tectonic Fragdrill and the killteam terrain to name two. Both kits are detailed as fuck and took a lot of labour intensive activity to finish. The Fragdrill (on the right) is actually a weapon for use in games but as I've pretty much worked out my favourite lists for 1500 point games (my most common type) I find it difficult to shoehorn a 75 point model into it as it sometimes seems there are plenty of passengers in the list as it is! I also virtually finished a castle and some storage containers but not enough so they get their own posts. They will do of course, but not today.

I have recently started recording my battles onto an Excel spreadsheet to keep tabs on how I'm doing with the possibility of me learning something from it, so far no insights but here are the stats; played 14, won 7, lost 4, drew 3. A 50% win average.  Not bad for a randomly determined game. 12 games were with the Genestealer Cult and two with Aeldari. There is a running joke in our group on how OP GSC are currently in 40K. Not sure how much I agree but they seem to be doing ok so far. It is probably far more accurate to say I am a military genius along the lines of Hannibal, Napoleon or Jervis Johnson. I managed 8 battle reports out of the 14 so that's an achievement in itself. Speaking of battle reports they are getting more attractive as more and more models are getting finished by myself and my opponents.

One thing I've alluded to in my last post was our gaming group starting up a league. 10 combatants each playing one another once per calendar month leading to 9 months in total with a 1st/2nd place playoff to have a grand champion. Sounds like fun but logistics will tell. Other plans for the coming year is to play a few games using a Ynnari force, hopefully with all types of the Aeldari armies. Obviously I wish to paint up at least another 100+ models but if contrast paints are willing I hope to do a lot more. Scenery-wise I want to add some more alien plant life so I can fill a table with freaky flora. I'm also trying to make a board themed around the webway but that is still very much in the scratching my head without a clue stage of the process. Whilst on the subject of modelling projects I intend to work on my scenery a lot more and one of the things I want to finish asap are two more medieval townhouses and two adobe style buildings for my sort of desert type terrain. Anyhow time will tell if my ambition once more far exceeds my focus.

All that remains for me is to wish all my fellow gamers, followers and accidental visitors a Happy New Year and a 2020 full of hobby excess.