Aloha! Welcome one and all! Just a quick (that may end up long) update on my painting progress. I would say hobby progress but as there's a global pandemic going on, bugger all gaming is happening. As previous posts have alluded to 2020 was going to be this brilliant gaming fest when we played a 40K league and everyone had a great time. That's obviously on hold now so on the plus size I have managed to paint some shit up.....

Probably my favourite thing about the Astra Militarum fluff is Colonel Schaeffer's Last Chancers, a nod towards the Dirty Dozen movie where a group of army criminals attempt to assassinate a high ranking German officer in WWII. GW brought out a version out with their 'crimes' in a White Dwarf and a series of rules for each model to make for interesting suicide missions. They were modeled as coming from different AM regiments from across the galaxy and really showed out the diversity of the army with various uniforms and two female troops.

Once again Citadel contrast paints were used. Colour-wise I used Militarum Green for the trousers (and skirt), Creed Camo for jackets, Gullimann flesh for skin tones and Goregrunta Fur for most of the webbing. A lot have Basilicanum Grey and Black Templar in there as well.


They all had cool sounding names and each had special rules that possibly worked well in 3rd or 4th edition 40K (I never played it much). For example Brains (second from right in the above picture) could hack and computer system on a 2+. Very thematic and useful in small skirmishes but in the Grim Darkness Of The 41st Millenium 8th edition not so useful. another rule Ox (second from left picture above this one) lost his shit if Brains died and doubled his strength and toughness for the remaider of the game. I am tempted to recreate the rules for the Last Chancers for the current edition, but with the general lethality of the game 12 models with special rules seems like effort.

Next up are some more Catachan Jungle fighters. Using contrast paints I knocked these up in pretty much record time. They seem to be much brighter then my previous units so I hope they can blend in without too much visual trauma. These were done at the same time as the Last Chancers so I used the same colours.


The two pictured above with the Commander are both plastic models I got in an eBay job-lot. The one with plasmagun is known as trooper Beard and has the distinction of killing a Screamer Killer during the Second Battle of Lernin Kerv. Trooper Boltgun has no such stirring war story. Maybe he will for the Third Battle of Lernin Kerv that hasn't occurred yet.

No painting update would seem right without some Genestealer Cult models sneaking in to here they are; three Hybrids that have certainly seen some action, like trooper Beard, but due to me not having ever mentioned them in a battle they will remain anonymous for now (just how they like it). Contrast colours were once again the heroes.

Another unit sat on the nearly finished area was my Magus and his two little bug eyed friends. Familiars are fun and they can give the Magus some additional spellage at crucial times of a game plus some extra attacks to thin out some rank and file. This gets my GSC army to well over 80% painted by my guess. The main item to finish now is the Patriarch and then  its off to convert up some vehicles to finish the army off.

My final three models are a little bit more interesting I feel, if only because I have given them back stories. On the left is an Orlock Juve that's been given a shotgun to play with. Not the best weapon to shoot single handed but it's a testament to cadet Onanism's wrists that he even attempts to shoot it like a pistol. In the centre is an old confessor model. Given the same colours as the rest of the guardsmen he will, (more often than not) represent a veteran with a plasmagun who is the squad's unofficial chaplain when there are no sanctioned Preachers around. He may wend his way into the entourage of an Inquisitor as plasmaguns are a good way to teach the ungodly about The Emperor. Thirdly on the left is a model I bought several years ago from Iron Mammoth Design. Now they seem to be available by Rattrap Production but I can't see them on their website. Anyway, the model on the left is a Shaolin Monk whom I stuck to a rock as he looked all meditatey and then lost interest in painting. Then came Contrast paints and an idea for a combat instructor for new recruits in my Krablokistan army. So Master Xhuc Pan Tang was born. A monster in close combat (for a human) due to his martial arts. Carrying nothing but a staff (which in game terms has to be a blade of conquest) he will more than likely be hitting the tabletop in a batrep near you when the restrictions lift. 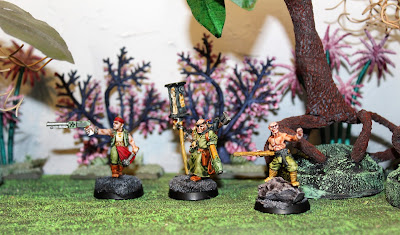 So that's it for now 27 more models have made the big time. Hopefully, in the not too distant I can get rolling dice for these little soldiers  and create magically theatrical batreps to enthrall and excite all and sundry. Anyway, feel free to comment below and tell how great I'm doing without much effort. Until next time (there's a very good chance there will be more Catachans) cheers for dropping by.

I would not have guessed contrast paints were used on your last chancers; nicely done and congrats on the collection

Thanks very much. I really believe I will actually finish painting my collection thanks to the new paints. I have another slew of Imperial Guard on the way which I will hopefully get up on here within a week!