Various Inhabitants of the Imperium

Greetings. As the Irish government have effectively stopped me from going to pubs, and even playing games at my buddies houses I have managed to get some shit done! So here are the fruits of my labours;

So here are the first items. Some 25+ years ago I was in Forbidden Planet in London and bought half a dozen TSR blister packs. There were Dretch and some unidentified vampire monkey things, and these. I think they were set on some weird non DnD setting whose name escapes me. A generous slap on Volpus Pink and they were virtually done. To give them a slight 40K feel I painted the shafts of their implements Athermatic Blue to give the impression they have some sort of power weapons so they might have a chance in the 41st Millenium. If you know what these things are called give me a shout in the comments below please.

Next is a model from the Mutant Chronicles game system (that I never played) but really like this model. Originally I was going to use it as a Chaos Champion but never quite managed to paint it in a way that I was happy with, of course the first time I painted it it was with orange pantaloons and it sucked all enthusiasm out of me to complete it. Once again contrast paint came to the rescue and as this model has loads of nooks and crannys it took to the lazy paint job like a duck to water. As far as seeing this model on the table I'm thinking it could see some action as a daemonhost for my recently undercoated Inquisitor's retinue and also another proxy in my Drukhari army as maybe a Sslyth.

I'm a long time fan of Blind Beggar Miniatures. These are from several ranges. One thing I really like about them is their simplicity. I don't mean it in a derogatory way, but rather in a I don't have a kajillion confusing and not immediately apparent what they are type adornments, for character models this is fine, but for rank and file - it just makes completing an army a chore. That said the singing alien was given painted sphere's over her dress which were supposed to seem like eyes, then a dab of green instead of black and they look more like frogspawn. Also in this group in another cyber dag, can't remember how many I have now but at least 6 I reckon. Also here is a sci fi woman, a interplanetry governor and his crazy cyber flunky.

Next up some more Colony 87 models, some from phase one, two, and three. Up first are three models from phase 3 - the one from Crooked Dice. On the left is a courier, a guy whose trusty satchel and heavy gloves make him ready for anything. Along side him are two pilots, a human female and an alien carrying his navigator, sex toy or next meal, I'm not 100% sure. All three models are great sculpts with plenty of character.
Next up are a trader and two space mechanics, also from the Colony 87 range. The trader is from the first wave while the others are from the second. The trader has quite a few bags and pouches while the other two have assorted tools ideal for maintenance in the 41st Millennium.
Up next are some of the Hoi Polloi of the Imperium a dignitary, two nobles, a porter and an alien ambassador. On the left is a dignitary of some sort. Dignitary probably means some sort of well to do official who doesn't get his hands dirty but probably has the power to get others up to their elbows in trouble. To the right of him is a male noble who will be used as a planetary governor.  To his left is his bird, a willow but unfriendly looking sort who carries a child, homunculus, robot dolly around with her. To her left is a porter, or perhaps some kind of spy? Finally an alien ambassador stands alongside which given the nature of the imperium goes to emphasise how corrupt/remote this part of the Imperium is as his head isn't being displayed in the local eccleisiarchy headquarters in the enemies of humanity exhibit.

Finally I have finished some members of my Genestealer Cult. Some old Imperial Guardsmen with some brand-spanking new  Neophyte heads. I  have already painted up two Brood Brother squads in the colours of the Assembly of  D'Keddes, but these ones will be able to slot into my Krablokistan army if I'm short on points and I need to drop a Leman Russ but still want to kill tanks.

So that's what I've got finished and I'm pretty pleased with them. Next on the list are some Drukhari Wyches, that is of course unless I get distracted, which is highly likely.  So until then ta ta for now and wash your hands after touching dirty things.

Heroes of the Imperium and Anarchists

Greetings, welcome to another thrilling edition of Jason paints stuff. This episode; Appointment with Terror. * Some of these models have be... 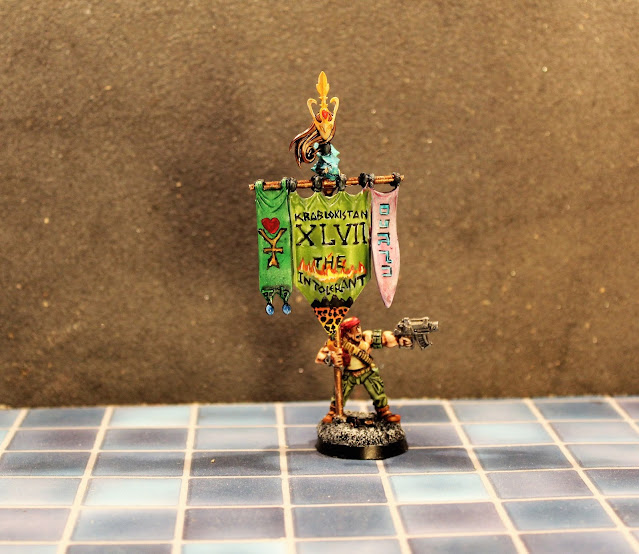