Welcome to a new semi regular feature of my blog; Horrible things you might find in the Commoragh. to the uninitiated the Commoragh is the realm of the Dark Eldat (Druchari) who are the most horrible feckers in the galaxy. Like most of the other awful denizens of said place but more into the wanton sadism for shits and giggles rather than any ideological reason. So without further preamble here is some thing you might find in the Commoragh which are horrible;

The Durgar are a Druchi slave race that have been a part of Commoragh life for centuries. Originally used as fodder in the arenas, Durgar became fashionable as durable fighters whose thick skin and resilient nature made for lengthy fights that keep spectators enthralled for many bouts. A stubborn nature and a delight in the vanquishing of enemies made these alien highly entertaining for the paying masses. In appearance Durgar are grey skinned stout humanoids with grey skin and bright purple hair. Durgar are sometimes confused with Squat abhumans as they have similar physical attributes but less human colouring. Durgar have a vicious temperament and revel in bloodshed making them popular additions to any self respecting Archon's retinue.

Another seldom seen denizen of the Commoragh are Ynnari Warlocks. Almost exclusively found on Craftworlds. Occasionally warlocks travel to the Dark City, sometimes with high faluting ideas about redemption and such but other times they could be agents of the Ynnari and up to something more deathy. This particular Warlock is painted in Ulthwe colours with a red helmet to represent Ynnead. This particular one has a severed Astartes arm as decoration and he probably also uses it to get into cool parties in the Commoragh. worth noting is th fact I finally found a use to Aethermatic blue contrast paint. Two coats made a reasonable effect on the Witchblade.

I recently read a 40K short story where Warp Spiders were valiant heroes. They warped in killed some marines and saved the day. Probably. I then thought I'd paint up some of mine. They probably act as pretty effective assassins in the Webway and have numerous kills in the Commoragh too. They were 90 % done very quickly with contrast paints then languished in a case while I procrastinated over the soulstones of all things. Fun fact; Aspect Warriors have average 15+ gemstones per model. Thank Odin for the technical paints otherwise I'd never get the bloody things finished!

Back in 1993 I purchased a squad Fire Dragons. Some twenty three or so years later I got hold of another five of Phil a member of our gaming group and semi-regular thorn in my side with regard to his Alpha Legion heretic Astartes. One of these models came to me sans a head, so an old wood elf beastmaster lost his so the Fire Dragons were up to full strength. In the last game I had against Phil I discovered that the missing helmet was adorning a Noise Marine. This has prompted me to finish these models so I can give battle to the Alpha Legion with their Slaaneshi mates and retrieve the helmet. Of course giving the helm a damn good wash as you just don't know where it's been recently. Anyway, this squad of Fire Dragons are sometimes found accompanying other members of my Ynnari faction doing clandestine stuff and looking for lost equipment. These models were some of the last ones started before I started using contrast paints and have both white and grey undercoats giving them two distinct looks. I'm not repainting them though.

These last models were not painted by me but rather Aaron, another regular opponent in my gaming group. Using strange equipment such as "an airbrush" he got these done with very little effort from my part. Aaron does paint models for money so if you want to see more of his work and possibly get him to do something you can contact him through his instagram account. One thing I will say about these new plastics is they are very delicate. Both the Visarch and Yvraine have had some battlefield damage necessitating pinning. So far the Yncarne had stood up to the wear and tear of the 41st Millennium.
So that's you all caught up with what I'm doing and hopefully there will be some Wyches coming along soon. I actually have a lot of models in the tantalizingly close to completion area that I fall in and out of interest with. So next painting update could contain anything!

Popular posts from this blog

Sergeants Barker Punches a Primaris Marine in the face 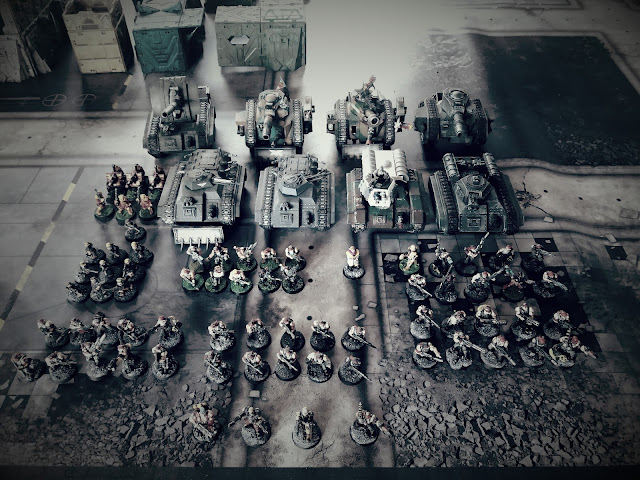 Somewhere in the 41st Millenium;
+ + + Attention of Porfectus Von Neestleroi, Supreme Commander Hemmerdale + + ++ + + Subject; Engagement With Asstral Spectres Debriefing + + ++ + + Secondary Subject; Commander Lope Koodos' Disciplinary Revue + + +
Porfectus Von Neestleroi, as per fratricidal fire protocols here is my report regarding the skirmish between part of the Scargill Planetary Relief Force and sections of the Asstral Spectres Chapter. As previously documented our primary mission is to reinforce Scargill but unfortunately when our fleet exited warpspace instead of arriving close to our intended destination we were still some 60 light years away. This was when we received a distress vox from the planet Purgamentum Minor in the Spumae system. A message was received from Planetary Governor Pudendorum to send a rescue force to engage a large well armed force of void pirates who were currently occupying the inside of the Governor's Palace. As regulations stipulate formal requ…
Read more

Don't Fupp with The Baldies! 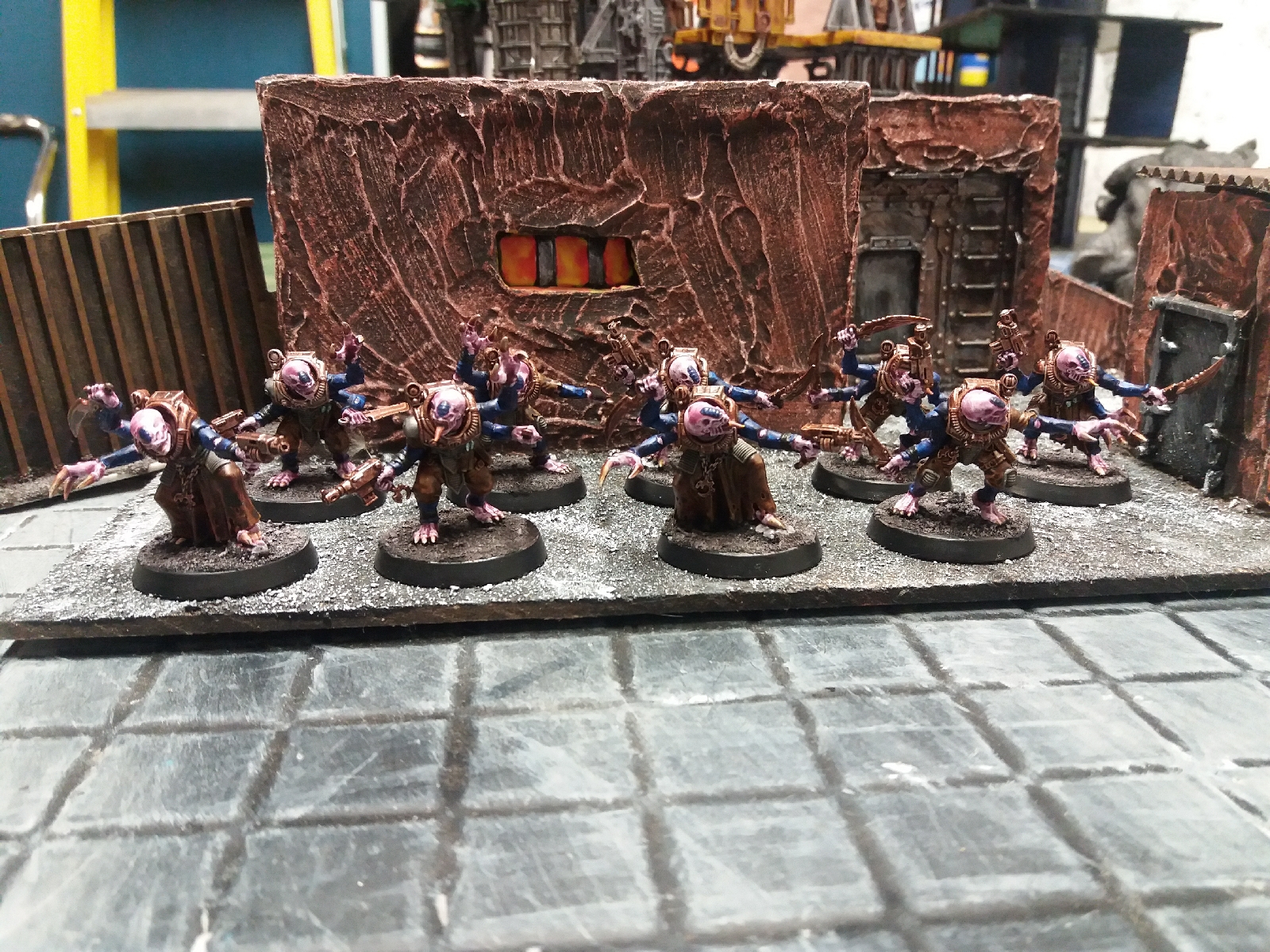 Hallo. Some more work has been done to my burgeoning GSC army. Again, Citadel contrast paints are the real hero as I'm just the guy dipping the brush in the pot, then over the models keeping it semi-tidy. One of the most consistent aspects of this blog is how inconsistent I am keeping focus on a single project. Last year I painted more models in common with each other an ever before. I believe the reason for this is "The Great 2020 40K League" which is a thing that has started. Nine games and one to prove who is top dog in Cavan at rolling dice and coming up with unpleasant lists for your opponent to attempt to deal with. Another member of the gaming group (Aeldari player) has volunteered to create and update a blog about the league so that should prove entertaining. I will update my loyal readers with details when I get them.
The Assembly Of D'KeddesThe Assembly of D'Keddes is a cult that originated from Trotskigrad in the D'Keddes system. They were happily g…
Read more

The Crusade of Dy Celiac IV 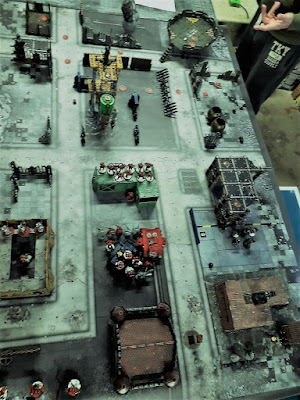 The saga of Brother Sergeant Buttafucco's escape from Dy Celiac IV was worthy of entry into The  Emperor's Great Colouring Book of the Astartes in itself. Having to disguise himself and his two remaining Eliminator squad mates as burly washerwomen to reach the orbital monitoring station was an act of genius only exceeded by the jobsworth attitude of the shuttle security detail. A brutal bloodbath later where several technicians were killed because 'they looked a bit purple' enabled the warning signal to be sent out. The message was simple, Dy Celiac IV had been overthrown by the Assembly of D'Keddes, a genestealer cult and the Blood Angel force was presumably wiped out. By the most random of chances, a single Astarte strike craft was close enough to respond. Buttafucco was surprised to receive a small force of Blood Angels including Lord Mephiston himself. After a detailed briefing the Blood Angels leader - Brother Captain Nivea ordered a swift assault on where the…
Read more