Following their skirmish with Ultramarines where (sub)Commander Bolshoy Bartlett was attacked and possibly killed (the body had been removed the Astartes), Commander Farg Woolstrop was surprised to receive orders to bolster Ultramarine forces that had become bogged down fighting rebels that had declared the entirety of Hemmerdale's second largest continent - Brearley - Imperium free. As had recently occurred several times in the recent past Woolstrop was half expecting the Ultramarines to immediately open fire as soon as they came within bolter range. But as was so often the case with the seemingly last minute orders he had been receiving from High Command lately no sooner had the Astra militarum deployed then the rebels came capering across to engage and the foul sight of the Traitor Legions could be seen behind them. On the plus side, the Ultramarines were holed up in an old jail and, for now at least, not shooting at him.....

Another Day, Another Batrep.

Welcome! Last week I participated in a game of 40K where my most recent enemy was now my ally. Yes that's right Billy's Ultramarines and my Astra Militarum have apparently patched up their differences in an adult fashion and smoked the pipe of peace. Not a moment too soon as the Ruinous Powers have landed on the beleaguered planet Hemmerdale intent on fomenting rebellion and nailing good honest imperial folk up on walls and using them as hood ornaments. We arranged for a 3000 point a side battle with Shane, Billy, myself and Aaron. Sadly Lord Nurgle infected the Tau force with Galloping Flatulence and they couldn't attend. Luckily Shane brought more than enough Chaos models to make up the shortfall. As I don't have either Shane's or Billy's army list, all I will say is Shane took 3 grands worth of Chaos and Billy took half that in Ultramarines. I brought my Imperial Guard that included 3 infantry squads, a unit of heavily tooled up Scions, a Leman Russ, Hellhound and Chimera, a meltagun special weapon squad and 2 heavy weapons squads (mortars and autocannons), the obligatory ratlings and sundry characters made up my force. The mission was the one where at the end of each battle turn each of the four objectives scores 2 VPs, it's called Only War. A simple mission that proved to be a lot of fun.

I have been working on my deployment and more specifically how to get first turn (first turn is a big thing for the guard) so crowding units into transports and the like is one way to do it. The various putting of things inside other things like Russian dolls was made inconsequential as it was a matter of the army with the lower power level goes first. Luckily for us it was the Imperium. By a fair bit I might add. So as underdogs we started but as first turn shooting phases go, it was pretty lacklustre. I think this game due to the amount of deepstriking units, it would have suited us to take second turn and shot up some 2+ armoured spawn of the Debel rather than cultists.


A brief summary of turn one. I poured a lot of Imperial low level ordinance at the only viable target - the cultists only to find they wouldn't flee due to their Daemon Prince carer by their side. On humanity's side all that was lost was my ratlings again, even though I had placed a commissar close enough to bolster morale/shoot one if they tried anything cowardly. The Ultramarines held and objective as did a squad of guardsmen, the followers of chaos also held two objectives.

End Of Turn One; The Imperium 2 Chaos 2 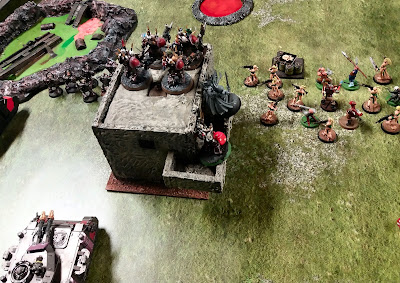 This turn had me desperately trying to deal with Obliterators and a Daemon Prince. I failed to dislodge a unit of them from objective 3 with my Scions and they got creamed by the return fire. Best moment of the game for me was when the Daemon Prince was very nearly incinerated by the Hellhound he charged. Left on 2 wounds I even used a command point to reroll the Hellhound blowing up but it was not to be. The Ultramarines moved up to crush some Chaos Marines but some Renegade Terminators  were lethal returning fire. On the subject of the Ultramarines they very nearly stole the glory of killing the severely damaged Daemon Prince with his special weapons but justice prevailed when my Leman Russ finished it off. Shane's forces blew away my main hope of destroying the Obliterators, a unit of guardsmen with meltaguns. They also stole the objective from under my guardsmen noses giving them a 3 to 1 score for the turn and therefore putting them in a rather tasty position. Also this turn two Rhinos worth of marines jumped out and made the taking of objective one a forlorn hope.

The End Of Turn Two; The Imperium 3 Chaos 5

This turn the Ultramarines kicked arse. I also tried to retake objective one with my own special character Farg Woolstrop. Gullimann with his homies advanced on objective two. The Imperial shooting phase was pretty good, killing a great many Traitor Terminators and  cultists. The Ultramarines then piled in to objective 1 wiping out said cultists and daring the remaining terminators in the old grey building to come out and fight them in a heroic manner. The Leman Russ killed the final Obliterator (I think) by objective 3 leaving Farg to (hopefully) hold it. In the Chaos turn enough marines got within 3" to retake the objective and Shane dutifully tried to assault Rouboute Gulliman off objective 4. The Primarch proved to be silly good in combat and caused mayhem leaving the forces of Chaos unable to retake it.

By the end of this turn the guard were nearly all gone - the weedy foot soldiers were anyway. The Leman Russ, Mortars and Farg Woolstrop on one side, a beat up Chimera and infantry squad on the other. Rouboute Gulliman was happily kicking the shit out of chaos Terminators and two five man Marines were still giving it large as well. The Chaos side had a fair bit of stuff left but time constraints meant we had to call it at the end of turn three.

It's a pity we didn't get 5 turns in this game as I think it still could've gone either way. It was a brilliantly enjoyable game with ups and downs right through it. If I have any regrets for my army list it was taking a special weapons team instead of putting 2 plasma cannons instead of heavy bolters on the sponsons of the Leman Russ. I seem to remember the Obliterators making quite a few saving throws from them and the difference between -1 and -3 on the AP could have cleared them away. Another unit of footsloggers to bolster my left would have helped also. Apart from that my plan went ok. I think Billy could have used his marines a bit more aggressively but considering the mayhem from the Terminators he may have been right (I'm always far too eager to run forward and lose too many men when caution is a better move). Shane played well (that wasn't his first rodeo) and his army list was solid. As a scenario Only War is cracking good fun and tricky enough to win as well. So all that's left for me is to thank the lads for playing and write a little bit of fluffy toss to maintain the narrative;

Despite taking heavy casualties the Krablokistan 47th had given a good account of themselves. What had initially seemed like a badly organised rabble of insurgents had revealed themselves to be well armed and allied to Ruinous Powers. Farg Woolstrop knew that the inevitable debrief would highlight Astra Militarum shortcomings and skim over the bravery of his men to the benefit of the Ultramarines. What was worse was, he would have to explain to his men why many of the survivors would have to undergo painful taint analysis before they were allowed to return to active duty. This posting on Hemmerdale was proving to be far too eventful for his liking and as if matters couldn't get worse several times he noticed several Ultramarines staring at him, and even though they were wearing their helmets he couldn't shake the feeling that they were staring at him with animosity. Then almost without even a cursory acknowledgement of the part his force played in the battle, the Ultramarines were gone. In a galaxy as huge as this the chances of continually meeting, and surviving meetings with Rouboute Gulliman seems extraordinary. Woolstrop mused, how much longer will his luck last....... 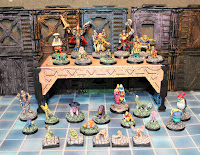