"Do you want salt n' vinegar with that Luv?"

Two months into 2018 and some more progress has been made! This update is all Blind Beggar stuff. I'm a big fan of Blind Beggar, their models strike a chord with me. Not as batshit crazy detailwise as some companies, they are unusual models that are a refreshing change from the overly militaristic models I seem to be painting a lot lately. The models below mainly come from the Crew Of The Mother Hydra Kickstarter and the Deep Ones collection as well. They are all a bit fishy.

The model below is from one of the 'Dark Clergy' sets. I like this one as it is unarmed, and can be used as an alien, a mutant or well, that's all I can think of for the minute. I painted a fish symbol on his top as is looks a plain without it and he can pass as a priest type that has contracted some strain of leprosy that turns skin grey without many appendages coming off. I decided to paint the top half of his robe different to the lower part as there was a very definite divide. Now he looks like an alien wearing a skirt and a hoody. He probably has a few ASBOs*.

One of the noble crew from the Mother Hydra. A smug looking  alien that reminds me a bit of Darth Vader for some reason. Looks like he would be equally at home dodging around the alien bazaar looking for bargains or force choking  rebel fighters. Sadly the lighting bleached the coral effect on the front of his cloak. Ah well, back to the photographic drawing board. 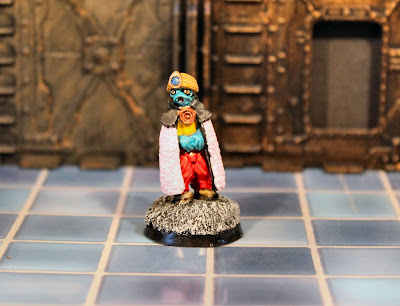 Another of the nobles. This one is either showing another alien buddy how steady his hand is or completely failing to dab. Either way I like this guy. It could also be one of those models that show his noncommittal to most things by evenly waggling his level hand to denote skepticism. This guy is another turban wearer, he also has a big scarf thing round his neck. I think it could have been made to look like an inflatable throat membrane as well, to blow up when he feels threatened. In any case another xenos for my guardsmen to hate.

This model is part of the security detail on the Mother Hydra. I gave a bit of a Starship Enterprise tunic. Some sort of alien projectile gun. Big googley eyes. I was thinking of putting some sort of emblem on his cloak, but just couldn't be arsed. Looks like a good mid level NPC for my Rogue Trader games. 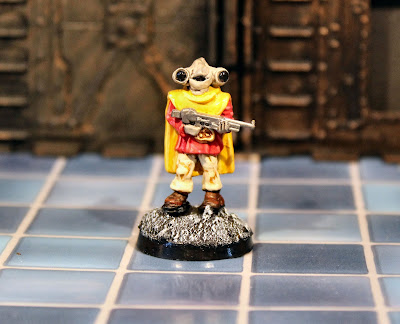 Here's the rest of the security team. Two beefy (or is that fishy) hard cases carrying heavy machine guns. These two tower over the rest of the crew and look like they take protecting the rest of their associates very seriously. I went for the Admiral Akbar look as I saw them like that in the Kickstarter. Despite looking a bit like muppets, I do like them. Maybe they should have been painted Kermit green? 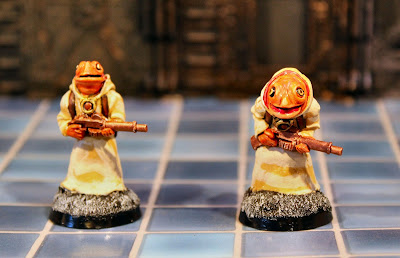 These two are virtually identical models. The one on the left is from the Mother Hydra, the other is a Deep One Hybrid. In my minds eye I see them as immature crew members, or maybe a subspecies that is adept at getting into the nooks and crannies that inevitably need an engineer. I love the bored pose on the one on the left and would come across as a disgruntled call centre worker if he had a headset. As it is he's probably pissed off he has an Amstrad computer. My only complaint about this model is his buttocks. They're horrible. In an attempt to distract attention from the buttocks I gave the call centre operative some dark green tattoos. The other, more conservatively attired one was fun to paint as I like flowing robes. A couple of moons and stars painted on him could make him look like a wizard mid transformation after a particularly crappy spell attempt.


Finally a group photo of all my hard work. Maybe they will see some table time in a Rogue Trader/Inquisimunda type game or they might even get embroiled in the Scargill Cleansing that everyone** is talking about. 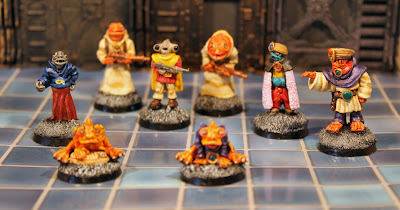 *Anti Social Behavior Orders for those outside the UK. Basically the council tell you to stop being such a dick.
** Me & Dylan anyways.